The very first game about a cyborg anti-hero was RoboCop, based on the movie of the same name, released in 1988. To be more precise, it was not one game, but several projects developed for different platforms: Data East released the title on arcade machines, and then ported it to computers and consoles.

Moreover, some versions are radically different. So, for example, on the NES, players got a classic side-view shooter-map with an atmosphere in the spirit of the original film. And on computers, gamers had more variety of mini-games available. At the same time, the ZX Spectrum version was almost black and white due to system limitations.

Therefore, players’ experiences with RoboCop varied depending on the platform they played on. Although all versions were generally warmly received, especially the arcade original and the ZX Spectrum port, which became the best-selling home video game of 1989. 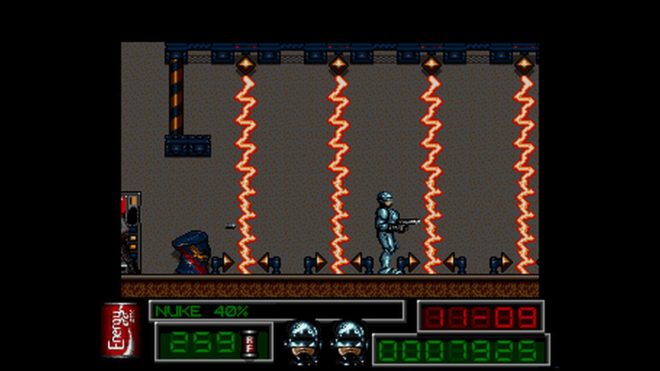 A sequel from the same Data East followed two years later. It’s a side-scrolling platformer that combines hand-to-hand combat and shooting, with RoboCop able to jump, speed up and slide.

The authors prepared a lot of spectacular locations and spectacular situations, although they went too far with the complexity: the players scolded the harsh conditions for completing tasks, inconvenient controls and repetitive levels.

The second part was also developed for different platforms, and each of the versions had unique features: for example, the game looked more beautiful on the Amiga, completely new locations and other puzzles awaited the players on the Game Boy, and the arcade version contained QTE. 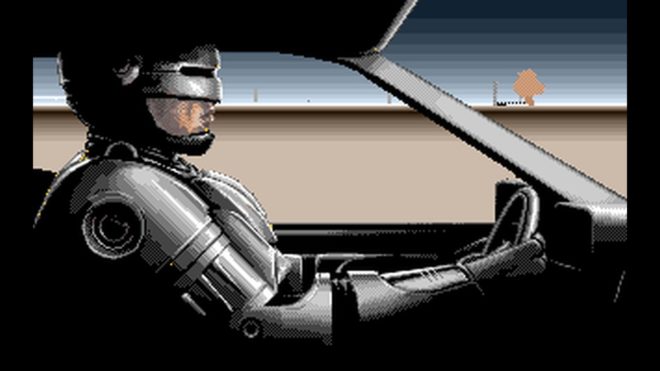 The third part of the series is based on the film RoboCop 3, offering players to follow the story of the confrontation between a cyborg cop and a greedy corporation.

The “younger” version of the game for the weaker NES platforms, Commodore 64 and ZX Spectrum was a side-view shooter, and was remembered only for its excellent soundtrack, and the wear system for parts of the protagonist’s body, which affected its performance. In between tasks, RoboCop needed to be repaired, and it was not always possible to find the resources to fix all the parts.

On the SNES and Sega Genesis, the game scared off gamers with its high difficulty and awkward controls, but on the PC, Amiga and Atari ST, RoboCop 3 suddenly became a three-dimensional shooter where players could drive a car, fly a jetpack and engage in first-person shootouts.

RoboCop Versus The Terminator (1993) 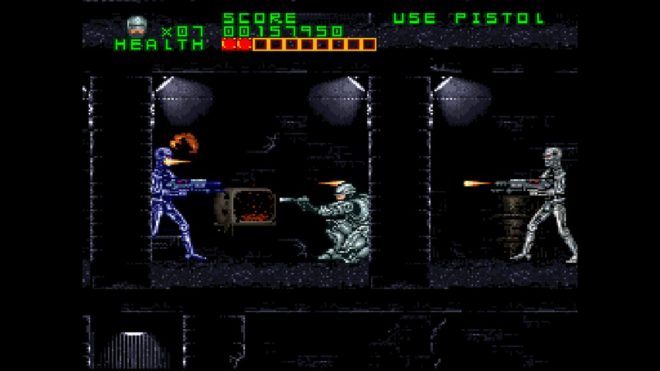 In childhood, many argued who is stronger – Alien or Predator, Robocop or Terminator. For the first time, Virgin Interactive decided to push the most famous cyborgs among themselves.

RoboCop Versus The Terminator traditionally came out in several versions, which differed in plot, locations and gameplay mechanics. In the SEGA console version, RoboCop fought Skynet’s AI, which sent terminators back in time to destroy the hero. On the SNES, the players were waiting for the story of Flo, a soldier of the Resistance, who traveled back in time to destroy RoboCop, but soon took his side and helped him in the battle with the terminators. And in the unreleased version for the NES, two Robocops were conceived – an ordinary one and an evil copy of him from the future, which worked for Skynet.

Gameplay-wise, each of the games was a 2D action-platformer with varied levels, dangerous enemies, and vicious bosses taken from both universes. In one mission, the player had to fight the T-800 Terminator, and in the other, they had to fight the ED-204; this brought dynamics to the gameplay and increased immersion. The project has been highly acclaimed and is considered one of the best RoboCop adventure games ever made. 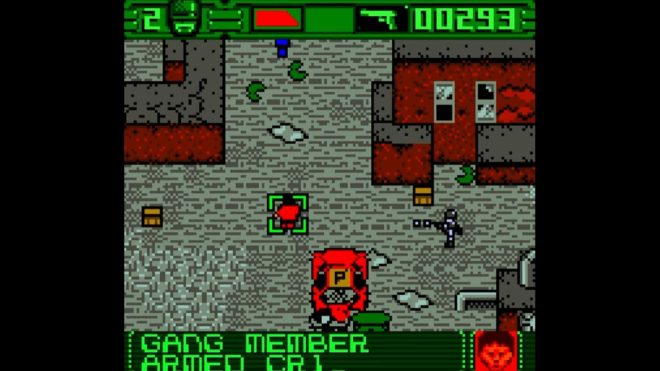 RoboCop for handheld consoles is a top-down shooter. Pretty poor, although he made it possible not only to shoot at opponents, but also to look into the police station and chat with NPCs. 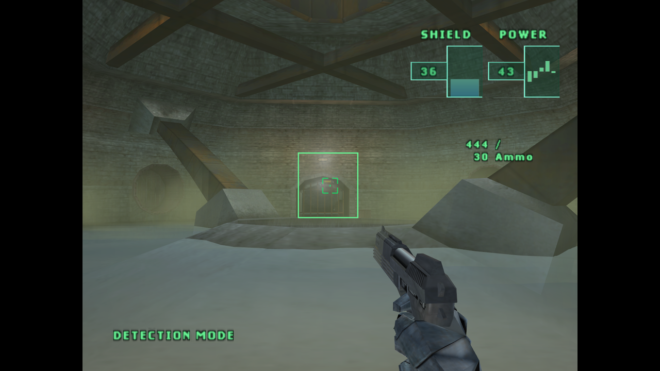 In 2003, a first-person shooter set in the universe was released. Already at the time of release, it felt outdated, scaring away players who could not compete with such contemporaneous shooters as Call of Duty and Max Payne 2, graphics, as well as terribly uncomfortable “tractor” controls and weak enemy AI.

Although the game had a certain charm, primarily due to the recreation of the atmosphere of the films, it did not achieve serious success, which led to the bankruptcy of the development studio Titus Interactive. 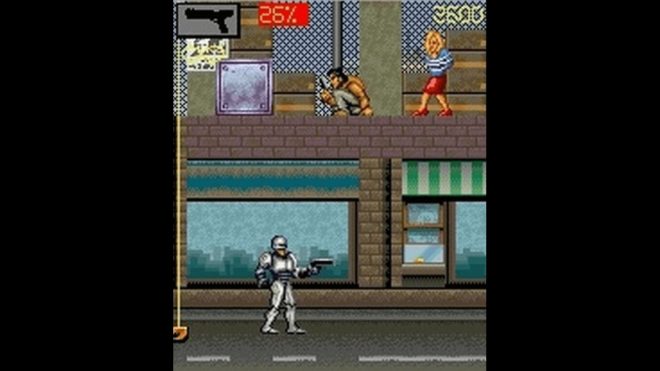 RoboCop for mobile phones was based on the first movie and was a typical side-scrolling shooter. Nothing special, but the players did not mind fighting the bandits on the screens of their gadgets. 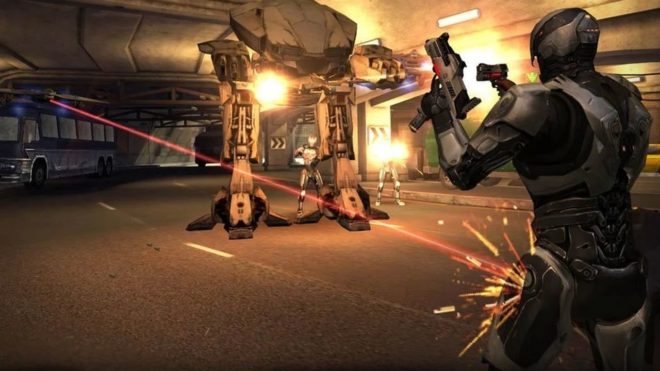 In 2014, a remake of RoboCop was released on cinema screens, and a mobile shooter was also released – formally tied to the film, but following a different plot. This is a free project, criticized for aggressive donation. At the same time, critics praised the interesting gameplay, good graphics and high-quality sound. 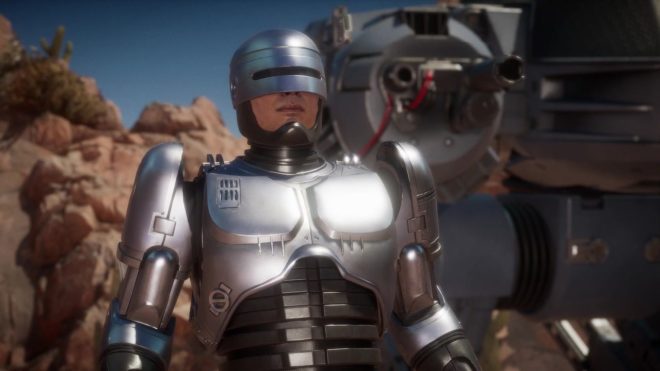 In the popular fighting game Mortal Kombat 11, RoboCop appears as a guest character. Considering that the game also received the Terminator DLC, players again have the opportunity to push these cyborgs.

The robot police officer in MK11 is slow, but has high firepower. He is equally good at close range, where he acts as a flamethrower, and effectively deters opponents at long range, thanks to his pistol and assault rifle. If you get used to his sluggishness, you can get a dangerous fighter capable of defeating any enemy. 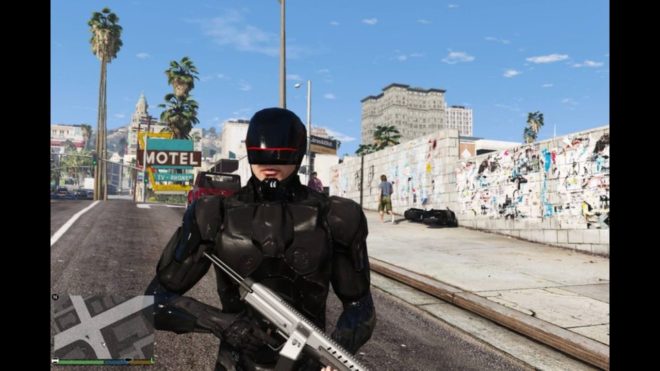 A mod for Grand Theft Auto V that allows you to explore Los Santos as RoboCop, the new version of it from the 2014 movie. It is known that there are a lot of criminals in the game, so this mod will be the best option for those who want to bring law and order to the streets of the city. 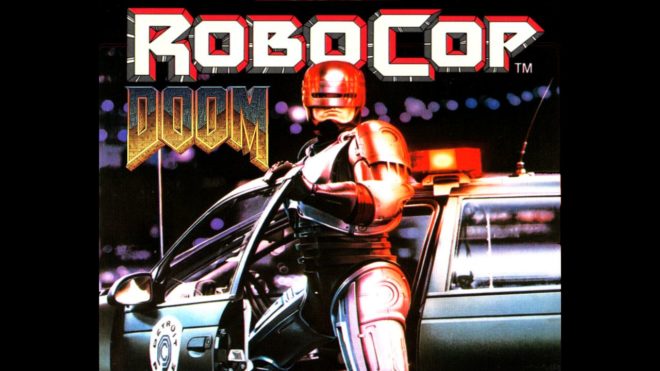 Robocop Doom is a mod for Doom II that allows you to play as Robocop. And this is not the usual replacement of the hero model, but a completely new storyline, with new levels, weapons and enemies. 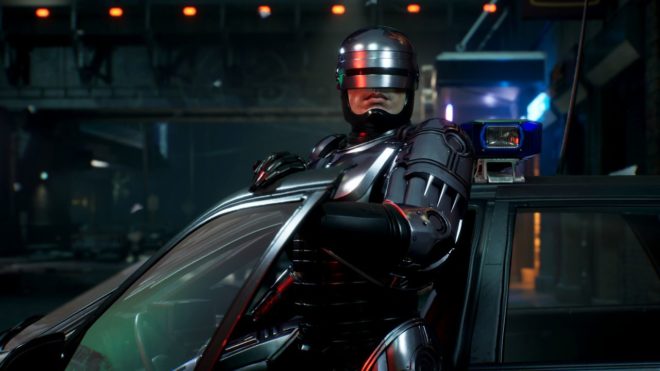 A new game based on the RoboCop universe is being developed by Teyon, known for the good shooter Terminator: Resistance, and will be published by Nacon.

RoboCop: Rogue City will offer players to get used to the role of a cyborg cop again and restore order on the streets of Detroit. In addition to a large arsenal of weapons and exciting shootouts, the game will also boast solid graphics and Peter Weller as RoboCop – this actor played Alex Murphy in the original film by Paul Verhoeven.

The release of the title is scheduled for 2023 for PC, Nintendo Switch, Xbox Series X|S and PlayStation 5.